All the makings of an overshoot. China Confronts Mounting Piles of Unsold Goods

But the main nongovernment survey of manufacturers in China showed on Thursday that inventories of finished goods rose much faster in August than in any month since the survey began in April 2004. The previous record for rising inventories, according to the HSBC/Markit survey, had been set in June. May and July also showed increases.

“Across the manufacturing industries we look at, people were expecting more sales over the summer, and it just didn’t happen,” said Anne Stevenson-Yang, the research director for J Capital Research, an economic analysis firm in Hong Kong. With inventories extremely high and factories now cutting production, she added, “Things are kind of crawling to a halt.”

Inventories of unsold cars are soaring at dealerships across the nation, and the Chinese industry’s problems show every sign of growing worse, not better. So many auto factories have opened in China in the last two years that the industry is operating at only about 65 percent of capacity — far below the 80 percent usually needed for profitability.

And municipalities are eager to limit registrations in a desperate attempt to cut traffic and pollution. 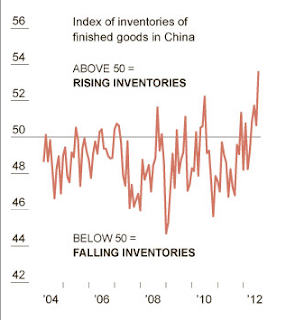