First-time homebuyers wish they had a second chance: report

Two-thirds of first-time buyers in the province admit they’re worried about affording their home if interest rates go up, the survey found.

New mortgage rules were brought in last month that shorten the maximum amortization to 25 years from 30, which was expected to deter some first-time homebuyers, although that doesn’t appear to be the case. Although sales are slowing in Vancouver, The Sun reported earlier this month that the Real Estate Board of Greater Vancouver’s president Eugen Klein said the decline appears to be caused by a drop off in investment buyers, and not declining numbers of first-time buyers. 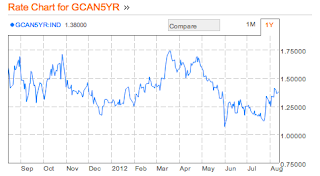 Chart of Rate from Bloomberg Five year bond rates have been climbing recently but they are still rock bottom.

The original report is here

More than half of first time home buyers with a mortgage (55%) said they were worried about affording their home if interest rates increase.