But after President Vladimir Putin began to tighten restrictions last year on the freedom of the Russian elite to move their capital, Russians may now be motivated to move their assets more permanently overseas.

“There is a sense that [Russian] people want to get their money out [of the country] because of Putin closing down the doors,” said Steward, of the Knight Frank property agency. “That could be a reason why they want to invest here. The Russian market has certainly found London, and I think Cape Town is now being discovered.”

"The exposure of China's banks (and now shadow banks) to real estate may look different than it did in the U.S., but it's very real. The main exposure is the reliance on property as collateral to support virtually all forms of lending throughout the economy, a situation that is very similar to Japan in the 1980s," he added, referring to a collapse in Japan's property market after a boom.

In recent weeks, mid-sized developers such as Hong-Kong listed Greentown China Holdings and Shui On Land issued profit warnings amid a downturn in the housing market.

Prices down 1.2% on a yearly value after a 1.9% drop the previous quarter. 0.0% for the country as a whole on the quarter vs. 0.5% fall for the Paris region. The fall was halted by stimulus measures, it seems. Has France’s property market turned a corner?

Faced with a newbuild shortfall and the failure of its "Target 500K" initiative to build half a million new houses every year to 2017, the government unveiled a slew of measures in early July to boost the sector. These include the simplification of construction rules and regulations as well as the extension of the "0 percent interest loan" to boost middle and low-income first-time buying.

Price growth in almost all capital cities in the three months to June has helped the median Australian house price soar almost 11 per cent in the past year.

But RBA board member John Edwards has tried to cool fears that the property market is becoming overheated, saying the rapid rise won't continue indefinitely.

The Economist: Canadian real estate among world's most overvalued

Canadian Real Estate Among World's Most Overvalued, The Economist Says


A chart provided by the publication showed that Canada's price-to-rent ratio sat at 175.9 per cent in the second quarter of 2014, right on top of the world alongside Hong Kong and New Zealand.


Charts from the Economist 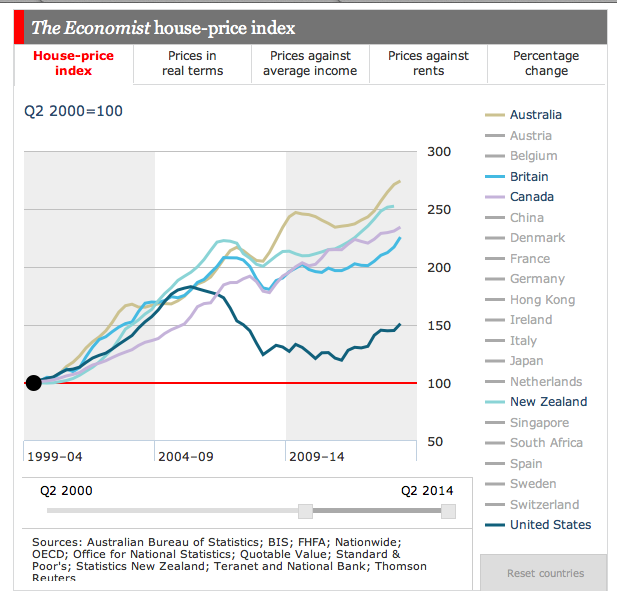 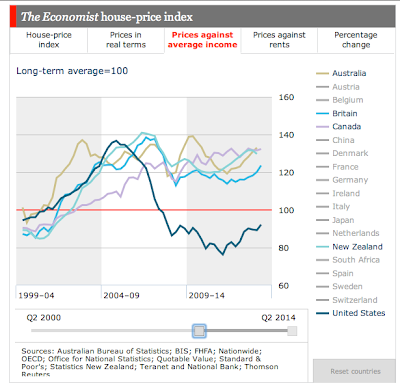 "It is stating the obvious that at present, while we may desire to see a faster reduction in the rate of unemployment, further inflating an already elevated level of housing prices seems an unwise route to try to achieve that," Stevens told an economics event in Adelaide.

The RBA this week held interest rates at a record low of 2.5 percent, marking 12 straight policy meetings since it last cut.

Stevens said a recent rise in unemployment to a 12-year high of 6.4 percent was "concerning", though he cautioned that it was hazardous to read too much into one month's data.

The cycle is running out of steam if you are stimulating but the returns on stimulating are declining.
Posted by GG at 7:36 AM No comments:

Banks are to blame for Australia's housing bubble

Australia's housing bubble is real and banks are to blame, says author

But in his mind, it's everyone else who is living in a "Disneyland" delusion by failing to spot a bank-led property bubble that shows no sign of deflating. "No one in the Western world has ever done what we are doing." It's "the sheer size of the loans relative to the incomes here" that troubles Mr David.

The median house price to income of Sydney is nine times, compared to 6.2 times in New York and 7.3 times in London. Even Adelaide is more expensive than New York on price-to-income basis. He is particularly troubled by the surge in asset values in his Sutherland Shire neighbourhood, where land is changing hands for more than $1 million. "I have never seen so many Range Rovers in the Shire. It's a small world out there and you know they haven't become millionaires overnight. It's eerily similar to Miami [in 2005 before the sub-prime crisis]. It feels like Groundhog Day," he said.