This measure is a straight up percent of pretax income needed to cover homeownership costs. The top end recommendation for the U.S. is 35% and that is in a lower tax rate environment.


Wright said he expected the Bank of Canada to start raising interest rates early next year, assuming problems in Europe and the United States are addressed.

I don't know about that optimism but raising rates in 2013 puts the most number of borrowers at risk due to the boom of expiring mortgages from the rush to refinance in 2007. 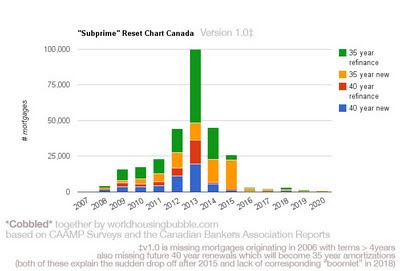 Note that the scale is wildly wrong, but I don't have a fix for it. It's just an indicator of where the balloon of trouble is from the feeding frenzy when 35 and 40 year mortgages became insured. That old post on subprime mortgages in Canada can be found here

I expect Bank of Canada will hold off until most of these mortgages are renewed and out of danger.
Posted by GG at 4:05 PM