Overseas investors are in a "frenzy". London house prices at new high

Asking prices in London saw an "unsustainable" 10 per cent month-on-month increase in October, pushing typical asking prices in the capital to STG544,232, leapfrogging a previous high set in July by more than STG28,000.

Prices across the country are 3.8 per cent higher than they were a year ago, although in London they have shot up by 13.8 per cent over this period, Rightmove said.

House prices in Netherlands down 4%, return to 2003 levels

Prices for September are down over 4% year on year, a moderating of the fall that was -10% mid-summer. 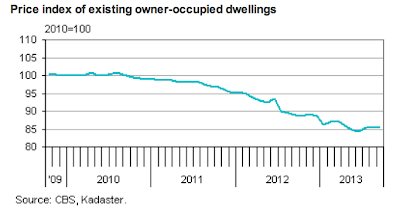 Prices of existing owner-occupied dwellings were at the same level in September 2013 as in early 2003. They were 19.6 percent below the record level registered in August 2008.


Rabobank thinks housing is undervalued
by 25 to 30 percent, and that prices will recover in another year. But admits that mortgage debt is already among the highest in Europe.

Worth noting that a gain of 30% would more than wipe out the entire decline since the change in world credit spurred by the crisis and would send prices to new highs.

Here are Dutch house prices against average income compared to Britain and US. You can decide if this looks undervalued and ripe for a rise. 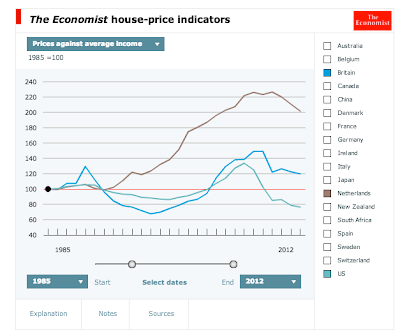 Along with most countries in the developing world, personal wealth in India is heavily skewed towards property and other real assets, which make up 86% of household assets.

Much of the pre-2007 rise was due to the appreciation of the euro against the US dollar. However, France also experienced a rapid rise in house prices, as a result of which real property now accounts for about two-thirds of household assets. Personal debts are just 12% of household assets, a relatively low ratio for a developed economy..

nterestingly, the composition of wealth is heavily skewed towards real assets, which amount on average to USD 294,100 and form 59% of gross household assets. This average level of real assets is the second highest in the world after Norway. In part, it reflects a sparsely populated country with a large endowment of land and natural resources, but it is also a manifestation of high urban real estate prices.

The long-term rise in real estate was interrupted only briefly, and since 2008 the market has seen both new construction and house price increases. Rapid growth in mortgages has fuelled a continuing rise in household debt. Mortgage terms were tightened in 2012 and the market cooled somewhat, but there are continuing concerns. It is not clear whether the final landing will be soft or hard.

"We think prices will continue to grow quite quickly over the next 12 months, but over the next 24 months we will see the rate of growth slow down," he told AFP, adding that prices were still 20 to 30 percent below their 2008 peak.

Now, just two years after he lost the property to the bank, wild sheep roam at will and with no hunting, the deer population has multiplied more than fivefold, said Fabian Vinagre, the caretaker of the estate near the Spanish city of Caceres 305 kilometers (190 miles) west of Madrid.

Sareb’s sell-off is part of the process of Spain’s recovery from a five-year slump that caused property prices to plunge more than 30% and drove default rates on loans for real estate activity as high as 31%.

Even so, Spain’s property market slump is still deep. House sales fell 15% in August from a year earlier and home- mortgage approvals fell an annual 43% in July, according to Spain’s National Statistics Institute. Fitch Ratings said today the non-performing loan ratio for mortgages increased to 5.2% from 4.1% last quarter.

Record-low interest rates have fueled a recovery in rate-sensitive sectors like housing, with auction clearances, house prices, and homebuilding permits all increasing in recent months. Home loans have also risen steadily up to now. Cementing recent signs that much of the housing market activity is being driven by investors, first-time homebuyers accounted for less than 14% of the market in August--the lowest percentage in nearly a decade. New lending to investors was flat on-month, but surged by almost 26% from a year earlier, the steepest gain since 2007.

Deutsche Bank also believes the rise is investor driven. New records were set in Sydney and Melbourne, fueled by eight rate cuts since end of 2011.
Posted by GG at 5:22 AM No comments:

Nosedives in the Wenzhou property market of up to 50% have forced some property buyers to stop making payments to the lenders and drop their guarantees to companies as their mortgages have exceeded the property's market value. Many have literally abandoned property, a tremendous fallout for the city's 300 surviving guarantee companies,

The 300 guarantee companies capitalized on the "residual value of collateral," using the remaining quota in a property mortgage to leverage a second mortgage. For example, banks, out of safety concerns, typically approved a mortgage of about 60% of the evaluated value of the property, with 40% untouched. Guarantee companies will try to offer mortgages for the remaining 40%, and claim a service fee. The entire operation relies heavily on a stable property market.