The total value of owner-occupied housing in Canada is estimated at $3.17 trillion
(up from the $2.94 trillion estimated a year ago). Mortgages and HELOCs on these homes total $1.07 trillion, leaving $2.10 trillion in home owners’ equity. This equity is equal to 66% of the total value of the housing.

If the value of houses falls 33%, homeowner equity and homeowner total mortgage debt will be equal. (33% would be comparable to the total expected U.S. decline/correction.) 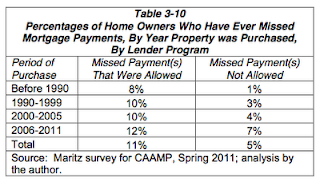 11% of mortgage holders missed at least one payment "that was allowed". Unfortunately the question was phrased "ever" missed, and the time range is multiple years. If there are a lot of repeat offenders in this group, a meaningful number of mortgage holders are pushing their amortization periods out 5 years by skipping one allowed payment a year. Can't really tell from this data, however.

More telling on that same table, the 2006-2011 initiated pool of mortgages 7% reported missing a not-allowed payment. Of the 2000-2005 vintage 4% reported this. This compares to 3% and 1% for the older pools, implying that the newer the pool the more at-risk the borrower, which bolsters the parallels one might draw with the U.S. debacle.

A 33% decline would mean these households need to bring a check to closing to get out of their house. 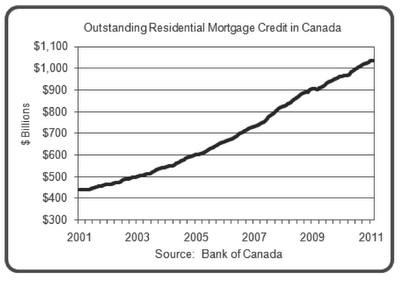 This is the bubble in a nutshell. Increased access to credit. Don't think that line looks worrisome, eh? 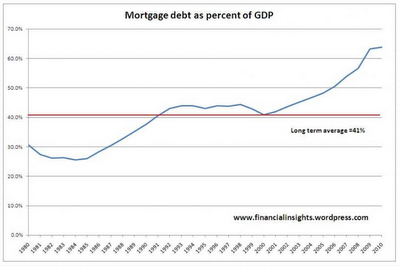 There's the problem. Banks are lending ahead of productivity. Every extra dollar borrowed to bid up a house is a promise of future labor. At some point, there aren't enough productive hours in the day for Canadians to pay this back.

Positive factors include the enormous wealth that is being generated by rising housing values and resurgent stock markets, which are bolstering confidence of consumers and businesses. Continued very low interest rates are also strongly supportive.

Mass delusion is a positive?

The real gem in this report is the interest rate susceptibility. To CAAMP's credit they really delved into this this round.


The survey asked mortgage holders to indicate “the amount at which, if your mortgage payment increased this much, you would be concerned with your ability to make your payments”. Among the mortgage holders, 42% indicated that they “don’t know”. Among the 58% who provided specific responses:


You had me at 42% indicated they don't know. I don't know whether to laugh or cry. 17% of households selling in distress will take this market all the way to the bottom. But, interest rate changes are not a necessary precondition to the market falling. To buy you have to first sell, to sell you must have a move-up buyer to take your place. Prices move out of reach of first time buyers (even with exceedingly cooperative bank lending) and that's the end of the game.

This analysis precludes any decline in prices. Yes, these are small numbers of households, it's the one-dimension thinking that gets analyses into trouble. A 33% decline is on the extreme end. 20% is a given.
Posted by GG at 7:59 AM