The market moves upward for a second month in a row after half a year of declining change in prices. 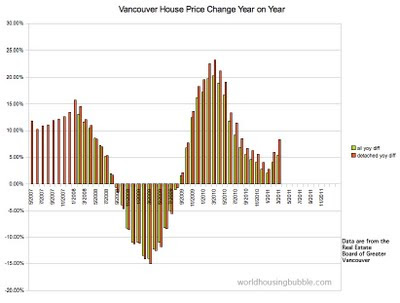 One possible explanation for the juice (much supported by anecdote, and some preliminary weekly data) is the high motivation for obtaining a 35 year mortgage imposed by a March 18 deadline. A lot of sales continued to trickle through the stats in the week after, btw.

If we assume the rule change was responsible for the leap in the market, what will prices look like if the previous trend returns in April?

April should be informative on the reasons for the leap in February and March.

April will also be interesting on another front: 18th is the date after which CMHC will no longer insure HELOCs. I, personally, believe this is more significant as it will most likely shrink access to home equity for the BC residents who are using equity to remain afloat (BC has been at a negative savings rate for years).
Posted by GG at 1:48 PM