I've been trying to avoid meta media posts, but this last week was busy enough on the general attention front that I'll make an exception.

The Canadian/Vancouver housing bubble got a lot of attention this last week.

As the chart demonstrates, Vancouver home prices have surged far beyond total British Columbia GDP growth and personal income growth. In fact, for housing prices to revert back to the GDP growth rates by the end of 2011 (assuming the BC economy grows at 4% in 2011), we would require at least a 12% and up to a 31% correction in home prices. This of course assumes that BC’s GDP isn’t linked to a housing bubble bursting. In truth, the dependence on real estate to spur economic growth has been very apparent, especially in Vancouver, and therefore a deeper correction would actually be required to find a sustainable equilibrium.

The chart in question: 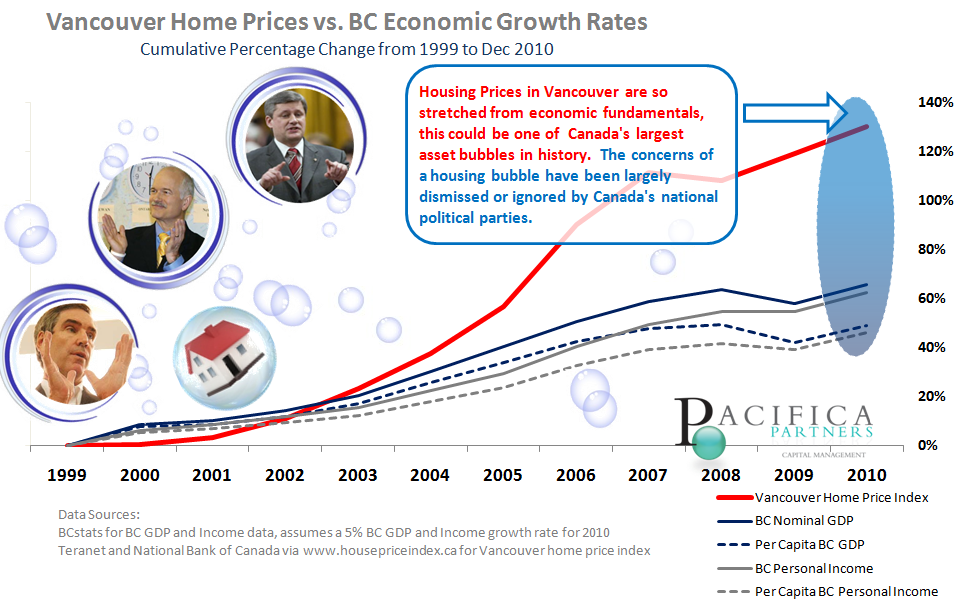 The current consensus is that Canada’s real estate market has achieved a “soft” landing and that prices will flat line but not decline substantially over the next several years. I disagree. The housing market in Canada is already in bubble territory. Average house prices have doubled in the last 10 years, while rents have risen by only about 30 per cent. The ratio of house prices to rent is now higher in Canada than in any other developed country.

But amid this frenzied property chase, we've forgotten a crucial fact: the past decade has been far from typical for real estate. Between the late 1990s and 2006, the share of homeowners jumped four percentage points, to 68.4%. Now consider that it took from 1971 to 1996 for the ownership rate to increase that much. (Though Statistics Canada data are only available up to 2006, it's likely the next census will show the rate has risen further.) Prices nationwide have never appreciated like this before, and credit has never been so easy to come by, nor as cheap. For an entire generation of first-time homebuyers, these conditions are the norm. Their perceptions have been warped as a result.

"I've earned more from the increase in the value of my home than I have in my entire professional career as a writer," Ricci [award-winning novelist] says. "But the only way I can use that money is to run a credit line, and that's a dangerous habit to get into."

Still, a line of credit against the value of their home is how Ricci, his wife and two kids fund a portion of their admittedly frugal lifestyle, particularly when paycheques become sporadic. During especially tight periods, Ricci makes interest payments on the credit line with money from the line itself.