When you talk to a Canadian they will assert that Canadian banks are wise and wondrous institutions. Where does this myth come from anyway? If they are so super-duper strong and perfect, why do they need bailouts at the first whiff of trouble?

That was CMHC taking on sour mortgages so those poor poor banks did not have to actually eat their bad loan decisions. 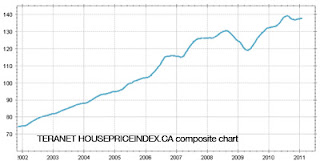 Yes, that tiny little decline of 8.9% necessitated a bailout of $75 billion dollars out of a total mortgage debt of ~$910 billion (average of 2008 and 2009 according to CAAMP). That would be a bailout on 8.2% of all mortgage debt, almost a one to one ratio. If we assume the same ratio applies again, that would mean a 35% correction on what is now in excess of $1008 billion in mortgage debt will require a bailout of $325 billion.

Admittedly, the growth in mortgages debt has been 90% in securitization, not the banks. That still leaves the taxpayers on the hook for the general bailout as they are the backstop for the mortgage insurance required for securitization.

The disclosure this week from the U.S. Fed is remarkable (via the Globe and Mail), and we’ve now learned that the U.S. government provided an additional $111 billion of financial assistance to Canada’s five largest banks.

[Related: Canadian Banks Use of the TAF]

Yes, they are totally safe banks. They just need a lot of bailout and liquidity help from not only their own government, but the Americans as well.

By the way, the TAF is now closed. If Canada decides to have a crisis entirely of their own making, that they cannot blame on their neighbors to the south, they will have to cough up their own emergency liquidity injections. If the Tea Party were not in charge of the house, the banks might get a warmer reception here, just to be neighborly, but I suspect they will get a nose thumbing next time around if there is no general crisis to hide behind.
Posted by GG at 9:21 AM