Based on the official housing statistics, you might have guessed that the sellers would have made out just fine, despite all the talk of a real estate slump.

House prices nearly tripled in the first half of this decade, and speculators, who are more likely than residents to sell a house in a panic, flooded into the area in recent years.

The truth is that the official numbers on house prices — the last refuge of soothing information about the real estate market on the coasts — are deeply misleading. Depending on which set you look at, you’ll see that prices have either continued to rise, albeit modestly, or have fallen slightly over the last year. But the statistics have a number of flaws, perhaps the biggest being that they are based only on homes that have actually sold. The numbers overlook all those homes that have been languishing on the market for months, getting only offers that their owners have not been willing to accept.

Unfortunately, there are also a lot of families that took on huge mortgage debts based on the ephemeral peak values of their properties. In effect, they cashed in on the housing boom without cashing out. As Ed Smith Jr., the chief executive of Plaza Financial Group, a mortgage brokerage firm near San Diego, said, “So many people picked up their homes, turned them upside down and shook them like a piggy bank.”

The withdrawals have been so big that the average household in Boston now has slightly less equity in its home than it did in 2000, according to an analysis by Moody’s Economy.com that took inflation into account.

All of the above are from this article: What Statistics on Home Sales Aren’t Saying New York Times 2006


In addition to the level of debt, the way it is employed may also affect out- comes during periods of economic stress. If debt has been used to finance household consumption, for example, consumption may be constrained following a shift toward reducing debt burdens. In “Household Borrowing and Spending in Canada,” Jeannine Bailliu, Katsiaryna Kartashova and Césaire Meh focus on how the accumulation of debt is related to household expenditures, specifically consumption and spending on home renovation. They observe that the share of consumption financed by home-equity extraction has risen since 2000. They also note that a much larger share of spending on home renovation is financed by these debt flows. Home-equity extraction in turn has been supported by rising house prices and financial innovation. Simulation results suggest that a negative shock to house prices could have a relatively large impact on consumption.

Check out the associated chart: 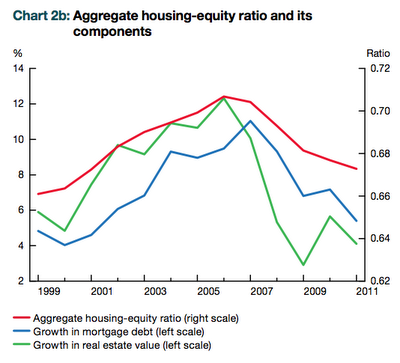 House prices have doubled, but Canadian housing equity has been falling. (Looks about level with 2000 values or up very slightly, but this is in an environment of greatly increasing "values". It's nuts.) Of all the parallels with the U.S. worth panicking over, this should be high on the list.

Back to the article, the trigger for the angst was an auction of foreclosed property.


The highest bid on one three-bedroom ranch house with a pool was $671,000. In 2005, the same house sold for $809,000. Another house, just steps from Naples Bay, received a high bid of $880,000, compared with $1.35 million a year earlier. On average, the bids suggested that the houses at the auction had lost about 25 percent of their value since 2005, according to Thomas Lawler, a real estate consultant who analyzed the results.

More coverage from that era:


Some local real estate professionals are livid. It’s bad enough that sales of single-family houses in the Naples area has dipped nearly 50 percent.

Now, an impending auction of 45 prime properties has locked up the market, Realtors contend.

However, the proposed auction has tied up the real estate market for the next few weeks, some Realtors protested in early October.

People have stopped buying so they can wait and see what they can pick up at the Oct. 21 sale, at which they can bid online or at the Naples Beach Hotel & Country Club for some 45 homes primarily in The Moorings, Lake Park, the northern boundaries of Old Naples and Cape Coral.

Real estate professionals say it is especially obnoxious because many of the properties that will be sold on the auction block — by seller desire, not because they can’t pay the taxes — were purchased by speculators who likely attempted to manipulate the market.

“The majority of investors are selling off with little or no profits. Look at the 11 homes (in Lake Park) going up for auction by an investor now,” says longtime Naples resident and Remax Elite real estate agent Jerry Krecicki.

The Buyer Today is Going to Wait for Prices to Soften


The Naples News reports from Florida. “The deadline for closing on properties purchased in an Oct. 21 auction has been moved back to Dec. 6. Auction operator Paul Drake said he wasn’t aware that one of the properties for which he’d announced a high-bid price is now in foreclosure.”

“In legal ads printed in the Daily News, Washington Mutual Bank announced foreclosure on 1121 10th Ave. N., although the ads refer to it as Lot 22, Resubdivision of Block A, Lake Forest. The owner of record, Marjorie Dresner, had numerous properties listed in Drake’s auction.”

“That is part of the problem, real estate professionals protested, before and after Drake’s advertised auction. It was unrealistic, because many of the top bid prices were far less than the mortgage prices, they said.”

“While Drake had denied financial hardship was involved for people who had put their properties up for auction, real estate analysts noted that a few days before the auction, Dresner had taken out a second mortgage on most of her participating properties.”

“News of the auction ignited debate about Naples’ real estate market, and whether sales prices were dropping drastically.”

Well, let's go take a look, shall we? 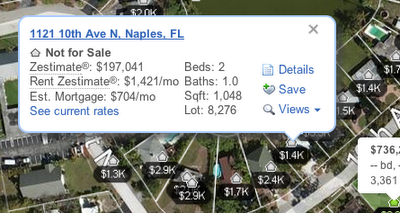 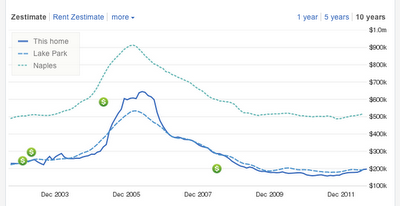 
Over the last few decades, the world’s financial system has endured a crisis roughly once every three or four years. There was the stock market crash of 1987, the Asian and Mexican meltdowns in the 1990s, the dot-com implosion of 2000 and, most recently, the aftermath of Sept. 11, 2001. We may now be living on both borrowed money and borrowed time.