A conservative assessment of Australian housing by the Wall Street Journal. Two years to decline 20% at this point in the market is about half the rate of decline of the U.S. That will still be painful.

Home Prices Tipped to Fall by up to 20%


Investec Asset Management strategist Michael Power said while Australian property prices had fallen six per cent since 2010, he expected them to fall further in the next 18 months to two years. "We're not seeing anything like the US, Irish or Spanish property bust here," the South African-based strategist told a business lunch in Sydney. "But I think over the next 18 months it could go down by double digits, 12 or even 15 (per cent). A 15 to 20 per cent (fall) would be my outside downside over the entire period."

He goes onto say that well, yes consumer debt is very high, the banks may be in trouble because of foreign debt financing, but there likely won't be any inflation.

I wish the article were longer because it would be interesting to hear how he thinks those conditions can possibly resolve without inflation. The chart below from oanda.com shows how buoyant the currency is. During the global liquidity freeze of the Great Recession the Australian dollar lost a lot, quickly, relative to the U.S. dollar. Australian foreign debt is ~1.2 trillion on ~1.6 trillion GDP. 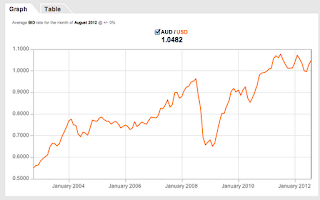