The first-time buyer segment of the population, which represents up to half or all transactions and where activity strongly correlates to low interest rates, is expected to be slowed by recent regulatory changes that will reduce access to insured mortgages.

Half of all transactions are first time buyers. HALF. The tweaks to the mortgage rules will impact half the buyers. Yeah, the market is going to notice that. Although, putting the kibosh on the massive intergenerational transfer of wealth that was going on, wasn't a bad thing.

Below is a handy chart from the report of prices changes by market by segment across Canada.

Royal LePage From this PDF

Below is another handy chart showing the previous downturn. This chart is not adjusted for inflation, that's why these downturns appear flat. The last one was far more significant than it appears. Royal LePage is again calling for a flatlining in real dollars. Given the extremes to which prices have risen this time, that's a bit mysterious, but hope springs eternal. They don't state it in the materials provided with the links, but for it to be flat this time again, inflation will have to surge. 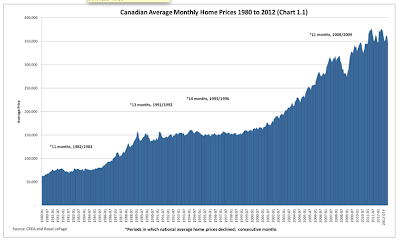 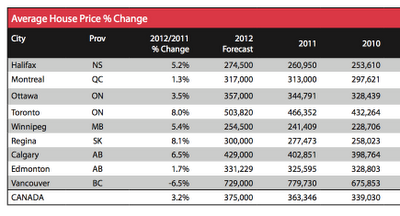 All of the metros on here are pretty optimistic, except for the last one. 6.5% down by the end of the year for Vancouver. That doesn't sound like a lot, but just the loss on a million dollar bungalow would buy you half a house in most of the U.S.

Lots of places still bubbling away. That's unfortunate. Every tick upward is farther it has to fall to normalize again.
Posted by GG at 1:20 PM