REIA Acting President, Ms Pamela Bennett said, “House and other dwelling median prices increased by 1.2% to $541,188 and 0.5% $430,230 respectively. These are the largest increases recorded since the September quarter of 2010.”

These guys are data sellers, so their public releases are pretty paltry. Too paltry to analyze what's going on.

I'm going to guess this is the market mix shifting, at least partially. The ABS data on price declines have been relentless. 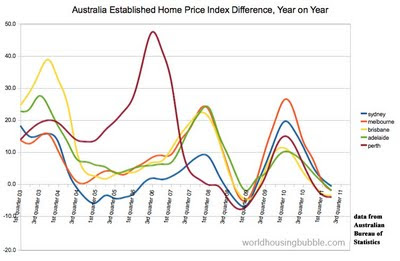 What played out in the U.S. bubble areas is sellers exiting with discounts enticing buyers into more house. Basically houses from the middle of one tier selling for a price that is actually the top of the tier below, but still above the median, thereby pulling the median up. Without a Case-Schiller style analysis, it's impossible to know why the discrepancy.

The ABC today sees the market mix shifting prices too, but in the other direction. New real estate record will spook investors

"Of course they buy a cheaper property... we are seeing increased sales activity under the $450,000 price range and so what that says is people buying cheaper property also pulls the median house price down."

"Cheaper" is an evil word here. I would propose "somewhat less financially debilitating".

There is a new real estate record which may spook potential investors to hear - experts say Perth's median house price is certain to drop for the sixth consecutive quarter.

A market with the median price dropping and average prices increasing is not a healthy market. It's a two speed market largely reflecting the inability of buyers to move up and more rentals being sold to lock in the capital gains. This indicates that a signficant correction is in order to bring the spreads between rungs on the property ladder back into proportion.