Real estate, especially where prices have already exceeded the economic value of the underlying property (compared to rents), is susceptible to shifts in sentiment. Will the recent earthquakes on the other parts of the ring of fire cause buyers, specifically foreign buyers, to shy away? Vancouver is attractive as a haven, for money, from political uncertainty. One might expect that its lacking in being a long-term haven from natural disaster would damage that overall reputation. Not that anything in Vancouver or BC has changed, just that buyers' risk assessment will have. 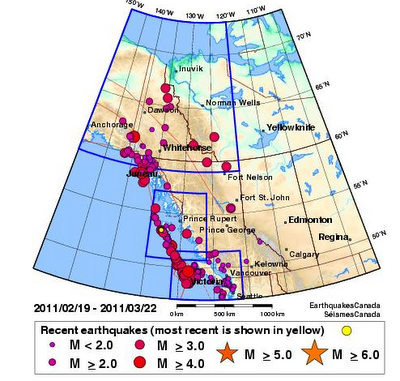 Diagram from CREW
I wondered how the real estate friendly press was handling this.

The Sun took the survey route, pointing out that residents don't believe their municipalities are prepared. This doesn't mean they aren't, just that people don't have faith.

The Times Colonist in Victoria takes a pablum approach. I especially like the close: She suggests the public visit the Provincial Emergency Program website at pep.bc.ca, or go to the "public health" section of www.viha.ca should an event occur. If it's a significant event, I'm not sure that's going to work.

Vancouver Island suffered a ~9.0 earthquake in 1700. The evidence suggests that it took place at about 9 p.m. on January 26, 1700 (NS). Although there were no written records in the region at the time, the earthquake's precise time is nevertheless known from Japanese records of a tsunami that has not been tied to any other Pacific Rim earthquake. Long live irony.

The City of Richmond assures residents that buildings are safe, even considering the risk of liquefaction of the soil. Relax, your lives are safe. Your 1.5 million dollar house will be cracked and bit sunken in.
Posted by GG at 9:18 AM