Just some excerpts that seemed in need of highlighting.

Despite heightened market fears and weak equity markets, the Australian economic outlook remains healthy. Our performance during the GFC was unparalleled and activity has since rebounded strongly. Part of the strength last year was directly attributable to policy stimulus that is gradually being removed. However, the current commodity boom will maintain growth momentum in the years ahead via stronger resource investment, production, exports and profits.

Here is the associated chart: 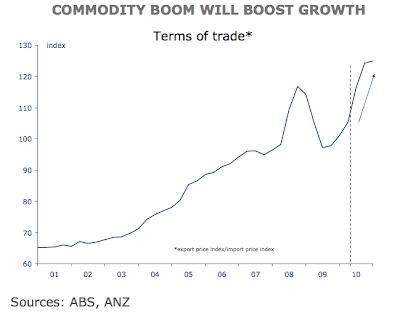 A bit of wand waving here. The comments, just yesterday, from Canadian, Teck Resources president Lindsay are apropos to this: "All of us in the mining industry are totally, totally dependent on the Chinese economy . . ."
ANZ slapped an upward arrow on a terms of trade chart and tossed up their hands and said "All is well! Let's move on." Wait, what? I, for one, noticed that hook at the top. I guess the arrow was supposed to distract from that?

The bulk of your outlook rests on one customer. Of which the report says:


There is every indication the China slowdown is being managed very well.

Really? Last reports out of China state that the government's tightening measures are having no effect on the run-away train there.

Importantly, some of the near-term price weakness being recorded is likely to be reflecting the unprecedented level of pent-up trading supply (property listings) flying in the face of the interest rate-induced reductions in buyer demand. Lower clearance rates support this market mismatch and would most probably have generated more significant price falls had the supply been ‘forced”. In the absence of a supply-side stress, the current weakness is likely to prove only temporary.

You lost me at "would most probably". (Actually, you lost me at "flying in the face of" but I pressed on.) Let's restate this for clarity; maybe, probably, that would help.

Rates went up, so buyers got scarce, increasing the number of listings, which caused prices to stagnate. If sellers were desperate, rather than opportunistic (as we are assuming they are) prices would have fallen more significantly, rather than just weakening. Have I got it?

Two things: 1, we don't know how many sellers chose to stay out of the market, desperate or not, to avoid listing over the holidays. Much easier just to wait and list after. 2, how does ANZ know there is an absence of supply side stress? Or, hm, they are not stating that it is absent, just tossing out a hypothetical because it sounds reassuring. For the record, a decline in employment does not need to precede stress and "forced" listings. Being overextended is sufficient. Some percent of people have a spate of bad luck every year and they will become the desperate sellers of the moment because they have no margin of error in their finances.

ANZ, on the other hand, is confusing short term debt servicing ability with overall affordability. Consumers almost always believe this, but when banks begin believing this, it's a serious warning sign. Try out this chart of price to income ratios against interest rates. Falling interest rates AND falling price to income ratio anyone? Also notice how when interest rates surged in the 70s, the ratio went up, not down. Historically, it is 2.7 to 3.5, regardless of other conditions. Deal with it. (Absent a distorted market, that is.)

I notice that the section on Queensland neglected to even comment on, let alone analyze, the Gold Coast's market conditions, so I skipped the rest of the report.

ANZ has been operating in a bubble so long, they have lost their grip on what is normal. But given that mortgage insurance represents a fat old slice of moral hazard they get served up every morning, why should they care what normal is?
Posted by GG at 7:37 AM