Based on the average of the two measures, home prices are overvalued by about 25% or more in Australia, Belgium, Canada, France, New Zealand, Britain, the Netherlands, Spain and Sweden (see table). Indeed, in the first four of those countries housing looks more overvalued than it was in America at the peak of its bubble.

Warning of plunge in house prices


''The latest global house price indicators are now falling in eight of the 16 countries surveyed by the magazine, compared with five countries in late 2010,'' the magazine said.
Using price-to-income ratios - a gauge of affordability - and price-to-rent ratios, The Economist said home prices were overvalued by 25 per cent or more in Australia, Belgium, Canada, France, New Zealand, Britain, the Netherlands, Spain and Sweden.


Charts below are from here
Ireland and the U.S. are approaching a normal market (where affordability is at long-term historic norms), so they are included as a metric. Britain and Spain are still adjusting. Australia, despite the year and a half of decline, is still second only to Hong Kong (and South Africa, which is not shown) in being over priced. 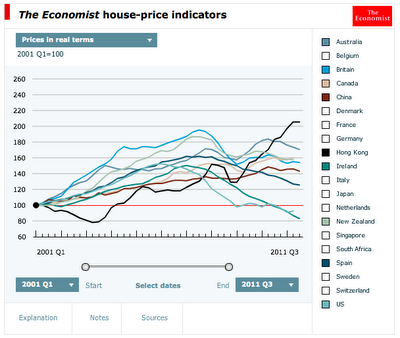 Looking at prices relative to rent, which adjusts for pure demand for shelter, the chart shifts around. France pulls into the lead for most overpriced, and New Zealand, Canada join Hong Kong. 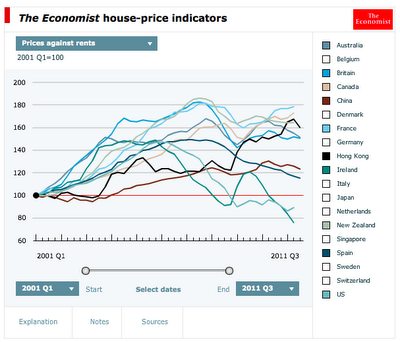 That could be exacerbated by a looming credit crunch, the magazine said.

But the analysis did not account for local supply and demand factors, the Real Estate Institute of Victoria said.


REIV is delusional. Those buyers aren't paying with local cash. A global credit crunch does not have to abide underlying demand. Buyer will can't be expressed as high prices if the creditors pull back.
Posted by GG at 6:56 AM