A guide to South Africa's economic bubble and coming crisis

A guide to South Africa's economic bubble and coming crisis


Unsecured loans, or consumer and small business loans that are not backed by assets, are the fastest growing segment of South Africa’s credit market and are essentially the country’s own version of subprime loans. Unsecured loans have grown at a 30 percent annual compounded rate since their introduction in 2007, when the National Credit Act was signed into law. Unsecured lending has become popular with banks because they are able to charge up to 31 annual interest rates, making these riskier loans far more profitable than mortgage and car loans in the low interest rate environment of the past half-decade. The unsecured credit bubble is estimated to have boosted South Africa’s GDP by 219 billion rand or U.S. $20.45 billion from 2009 to mid-2013.

Like U.S. subprime lenders from 2002 to 2006, South Africa’s unsecured lenders target working class borrowers who have limited financial literacy, which has contributed to the country’s growing household and personal debt problem. A 2012/2013 report from the National Credit Regulator showed that South Africa’s 20 million citizens carried an alarming 1.44 trillion rand or U.S. $140 billion worth of personal debt – equivalent to 36.4 percent of the GDP. In addition, household debt now accounts for three-quarters of South Africans’ disposable incomes.

Sadly, they seem to have stopped updating the data behind this widget, but for an illuminating chart, here is the old Clicks and Mortar from the Economist for South Africa. 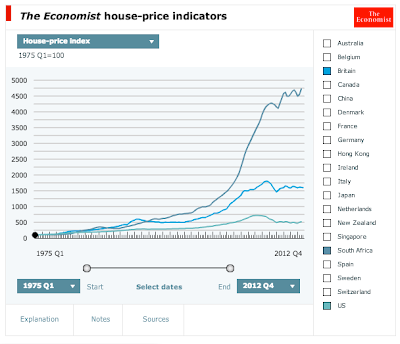 Interestingly, house prices don't look alarming at relative to average incomes. Since this isn't a graph based on the median, it's possible that income disparity AND a credit bubble are making this chart look rational. South Africa's income disparity is among the highest in the world. 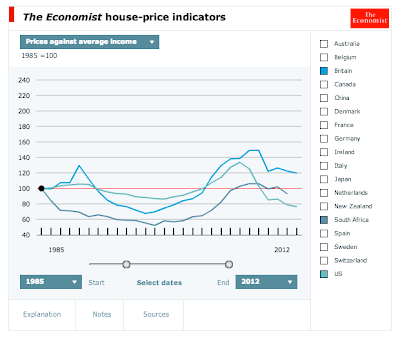