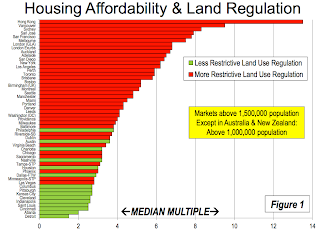 All numbers are median multiple, which is the median house price divided by the median income for the given geography.

California appears to be re-inflating the bubble. If interest rates aren't normalized soon, the U.S. is going to repeat the cycle already. 20 major markets were ranked as affordable down from 24 last year.

Demographia is pretty single minded about what causes housing in-affordability. For example, in the report Honolulu and London are mentioned as being severely unaffordable, no reason is given why this might be true in Honolulu, but London's dear market is caused solely by restrictive land use policies. The report doesn't mention what any local could tell you: outside money is pouring into both markets. Basically, capital inflows is not discussed in these reports and cheap credit given only a nod.

Each of Australia's major markets, with the exception of Sydney had housing affordability within the 3.0 Median Multiple norm during the 1980s, before the widespread adoption of urban containment policies, which is referred to as "urban consolidation" in Australia. 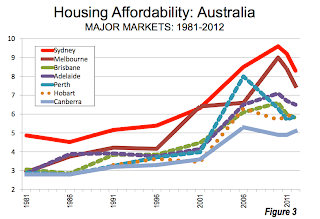 Somehow (not explained why) these policies had negligible effect on prices for a decade and a half. Then, suddenly, oddly enough, when financial markets were deregulated at the end of the 1990s and into 2000s, the end result of which cheap mortgages were being pushed at anyone and everyone, then prices soared into unaffordable range.

Land use policy is a symptom. Municipalities engage in it to reduce externalities and improve quality of life. Something Demographia doesn't want to grasp. I get the sense reading their reports that they resent that developers cannot always socialize so much of their costs. Or I guess they dream that if people could just build at will on the side of old spatter cones, and in tsunami inundation zones, Honolulu's high prices would just magically vanish.
Posted by GG at 11:17 AM