Will some housing areas be protected in a decline?

The short answer is yes. The long answer is: it depends on what you mean by "protected". In LA, California, there is an area called Manhattan Beach. It is a very desirable neighborhood. As a result, there is slightly more pent-up demand for houses there than in many other areas of LA. Declines in prices are seen as an opportunity to move in, therefore it attracts imported wealth from other parts of LA.

So, let's take a look at the two markets. Here is a random house in LA on zillow  The house value isn't important (apparently I clicked on a flipper special, i.e. the $ signs marking sales. Odds are I was going to). What we care about are the other two lines. LA as a whole peaks at 605k and troughs at say 365k. That's a 40% decline. 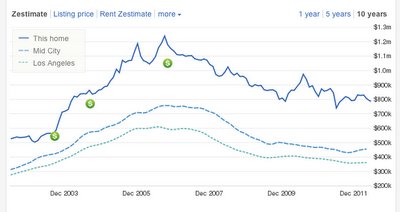 Meanwhile on the second graph of Manhattan Beach. Peak to trough it went from 1.5 million to 1.1 million. That's only a 28% decline. 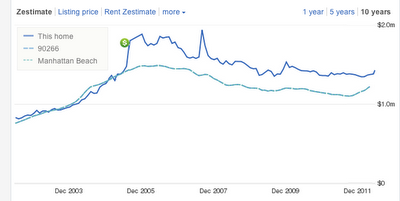 So, yes, desirable areas will do a bit better. For some measure of "better."
Posted by GG at 9:36 AM

There will be some unwinding of "price compression", but ultimately the endgame needs to justify a sustained imbalance. The adage that "good areas hold their value" misses the point in my view. Look at the divergence in unemployment rates versus education level and income level; it should be no surprise that certain areas are faring better.