For instance, the average March price for a detached house in Greater Vancouver was $1,155,521, while the benchmark price was $1,056,400—almost a full $100,000 apart.) . . . The other market segment —let’s call it The Rest of Us —will buy homes when there’s optimism about job security and continued income. That’s a much larger market segment.

I love this. The "rest of us" buy what affordable property? But no, a segue into how jobs are great.

B.C. is doing well on the job front, says Jestin. It has outperformed the national average consistently, and he believes that over the next year, B.C. will outperform Central Canada and the Maritimes and see employment growth.

Actually, according to BC Stats it's nowhere near as good as during the booming 2000s. 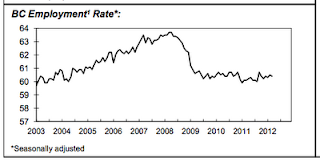 BC's unemployment rate in March 2012 was 7.0% and Canada overall was 7.2%, not exactly a striking difference.

Muir says those studies leave out one factor in the calculation: interest rates. We’re at lifetime lows—the bottom of a 25-year decline in interest rates, which means you can borrow more for the same payments.

Ha ha ha. I love it. This is such a shift from two years ago when anyone mentioned that short term mortgages in Canada resembled the teaser rate ARMs of the U.S. (in a market previously ruled by 30 year fixed) people would get defensive and say, no, no, we're not qualifying on that basis. Total debt load is what really matters. Well, we've reached the point where at least everyone is being honest. No one cares one whit about total debt load or what all these families are going to do when rates rise and now they freely admit it. Party on. Flaherty doesn't at least make a symbolic increase of 25 basis points, just to slap economists like this upside the head, he better be tarred and feathered at a later date. A little pain now would send a badly needed warning shot into this lost-sight-of-all-reality market.
Posted by GG at 5:55 PM